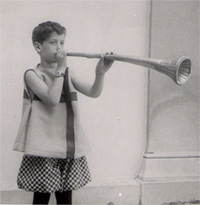 Stan has been preparing for a career in entertainment since the age of 10, when he created his very own television network in his bedroom (counter programming, t.v. grid, advertising, you name it) in Southfield, 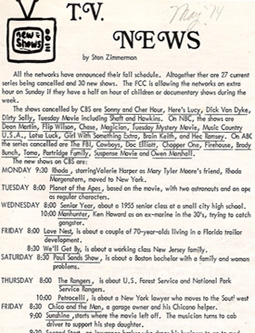 Michigan. He even penned a monthly TV column for his junior high school newspaper.

After attending Cranbrook Summer Theatre School for five seasons and Hampton Playhouse for two, Stan headed to New York to get his BFA at NYU/Circle-in-the-Square drama program. He appeared on Broadway dancing behind Rudolph Nureyev and the Joffrey Ballet in Homage to Diaghilev at the Mark Hellinger Theatre. If you look closely you can see him in such films as The

Chosen, Zelig and Risky Business. Stan worked in casting before moving to Los Angeles, where he's been part of one of the longest running comedy writing teams, Zimmerman & Berg.

Along with James Berg, Stan's worked on many television series, including season one of The Golden Girls, Brothers, Fame, Hooperman, Something Wilder, Roseanne, Wanda at Large and the highly successful fifth season of Gilmore Girls.  They penned the "Norman Mailer, I'm Pregnant" episode.  Z&B (as they're also known) have 2 WGA nominations to their credit -- "Rose's Mother" from The Golden Girls and the other for "Don't Ask, Don't Tell", the infamous lesbian kiss episode of Roseanne.

Besides writing/producing many television pilots, Z&B rewrote the Emmy and Peabody award winning Annie for ABC. They have also written for film, including both Brady Bunch movies. Z&B created and exec produced two seasons of Rita Rocks, a half hour comedy series on Lifetime starring Nicole Sullivan and Tisha Campbell-Martin.  The complete first season is out on DVD.  In 2013, they rewrote Christmas Bounty an ABC Family movie.  Z&B created Skirtchasers, a webseries streaming on tellofilms.com.  The comedy stars Elizabeth Keener (The L Word), Barry Bostwick and Meredith Baxter.  Stan made his scripted directing debut with this project, alongside Amanda Bearse, who also directed the series. secs & EXECS, his 2nd webseries for tellofilms, written by Jim & Stan and directed by Stan.  Amongst it's all star cast was Sandra Bernhard and Mindy Sterling. Sterling recieved a 2017 Emmy nomination for her role as "Shirla".  They're much talked about pilot script --Silver Foxes, a gay men's Golden Girls, had an epic reading with George Takei, Leslie Jordan, Bruce Vilanch, Todd Sherry, Cheri Oteri, Daniele Gaither and Melissa Peterman.  News of the event went viral and made such outlets as HuffPost, Foxs News, Boston Globe and ABC's Good Morning America.  Stan and Jim recently turned Silver Foxes into a play and had a vritual reading starring Takei, Gaither, Daniel Davis, Jim J. Bullock, Garrett Clayton and was directed by Michael Urie. The play was recently licensed by TRWplays.

Stan conceived, adapted and directed, SUICIDE NOTES: In Their Own Words, which won a Hollywood Fringe Festival 2015 Encore Producers' Award.  The show starred Oliva d'Abo, Allie Gonino, Peter Onorati, Brendan Robinson.  It's a one hour theatre piece in the vein of The Vagina Monlogoues.  There was a benefit/reading of the play, now entitled Right Before I Go, Monday Dec 4 2017 at NYC's Town Hall.  The all-star cast included: Ellen Burstyn, Judith Light, Michael Cerveris, Hari Nef, Maulik Pancholy, Alice Ripley, Lois Smith, Amber Tamblyn, Raviv Ullman and Vanessa Williams.  A one night benefit of the play was performed at The Ratner Museum in Bethseda, Maryland June 2018 and in Orlando at The Mezz in Sept on International Suicide Prevention Day. Stan performed in the piece as "The Narrator" in Orlando and for a two night engagement at Claremont High School in Oct.  That show was performed by high school students, faculty and school board members.  He returned to Bethesda July 2019 to perform again, but this time with a mostly teen cast from The Achieve Project.  Stan recorded this piece for the Quick Center/Fairfield University starring alongside Wilson Cruz, Hari Nef, Blair Underwood, Vanessa Wiliams and directed by Michael Wilson.  This virtual performance ran on the Quick Center's website in fall/winter 2020.  Stan returned to his hometown of Detroit in Oct 2021 to appear in a benefit performance at Cass Tech, produced by Amy Nederlander and L!ife Leaders starring Hill Harper.  The play (and Yes, Virginia) have been acquired by TRW (Theatrical Rights Worldwide). Go to their website for info on licensing in your area. The play will be presented by two community theatres, one in East Hampton, NY (May 2022) and Monroe, Wisconsin (June 2022). Stan will be appearing as the Narrator in Decatur, Alabama July 7 & 8. And alongside cast of "Gilmore Girls"  Sunday Oct. 2 @3pm at the Leavitt Theatre in Ogunquit, Maine.  Tkts/info: www.seedlingevents.com

Stan's theatrical company, Pop-Up Playhouse recently recieved 15 2018 Broadwayworld nominations for his plays Pledge, Knife to the Heart and The Diary of Anne Frank.  The first seaon of his company opened with Pledge, then came his new circumcision comedy written with Christian McLaughlin Knife to the Heart at the Dorie/Complex Theatre in LA. The show starred Andrea Bowen, Anne DeSalvo, Todd Sherry, Josh Zuckerman. Zimmerman also directed. It received rave reviews and SOLD OUT it's entire run. Wendie Malick returned to the cast for a LIVE reading in Spring 2020 for Play Per-View.  Season 2 of  Pop-Up Playhouse began with The Diary of Anne Frank starring a predominately LatinX cast.  The show received 4 BroadwayWorld nominations including Best Play.  It retrurned for a limited 2 month engagement this past Jan & Feb 2019 at the Dorie Theatre/Complex. It played for a limited run in Beverly Hills, CA the end of Oct 2019 and again at The Chutzpah! Festival in Vancouver Nov 2019.  Yes, Virginia played in a new production Dec 2018 with Mindy Sterling and Arnetia Walker (Dreamgirls).  The play had 2 Sold Out staged readings at Stagecrafters in Royal Oak, Michigan Aug 2019. Sterling and Walker reunite for a virtual benefit reading of the play Dec 2020 and performed it LIVE for Judson Theatre Company at the Bradshaw Performing Center in Pinehurst, NC in Nov 2021. The play had it's community theatre debut at the Melon Patch Players in Leesburg, FL Jan 2022.

Stan directed the music video for the band Whore's Mascara's song "All I Want".  It played in Outfest's BOOM! Music Festival and aired on LOGO's New Now Next series.  It was nominated for 3 PILL Awards (including Best Video and Best Director) and had a cameo by Laverne Cox.

Stan, also known as THE CASTING COACH, has run sitcom audition classes in LA, NYC, Dallas and Atlanta and coaches actors privately and does sitcom script notes/consultation sessions, both of which can be booked through this website.  He teaches two monthly sitcom audition intensives.  During Covid, Stan started teaches his 3 month Pitch-to-Page Sitcom Pilot Writing classes on Zoom.  For info about any teaching: This email address is being protected from spambots. You need JavaScript enabled to view it.

On his own, Stan wrote for Emmy Magazine and appeared on camera as co-host/showrunner on Situation: Comedy, a Project Greenlight-type show about the making of a sitcom pilot. The series, co-produced by Sean Hayes, aired on Bravo.  Under his solo production company Zimmerman Entertainment, he sold a half hour single cam comedy pilot, The New Twenty, written by Vanessa Parise to ABC Family and the half hour comedy, 15 To Life to YouTube.  In a full circle moment, Stan's consulting work took him to Moscow for four months in 2015 to help develop a Russian Roseanne series and to Budapest to work on a new sitcom for AMC Hungary in Nov 2018.

In another one of Stan's many full circle moments, he can be seen acting again in Jay Zaretsky's short film, Uno Mas on Funny or Die.  He also appeared in multiple epsiodes of Oxygen's All the Right Moves, a dance reality show starring Travis Wall.  Stan is a frequent co-host on Ethan Dettenmaier's weekly Combat Radio show and On the Rocks with Alexander Rodriguez (UBN, I Heart Radio).  He has also been a guest on CNN's Newsroom w/Brooke Baldwin Show (multiple times), The Morning Beat with Jai Rodriguez & Mikalah Gordon, Mark Thompson's The Edge, The Sheena Metal Experience, Sirius' Frank DeCaro Show, The Derek & Romaine Show, IMRU on KPFK and can be heard on the podcast, Out on the Lanai.  Stan has been a guest panelist for The Golden Girls at D23 in Anaheim and for all 6 Gilmore Girls Fan Festivals in CT and Unionville, Canada. There, he created and starred in The Coffee Monologues along with Sam Pancake, Aris Alvarado, George Bell, Todd Lowe and NIck Holmes.  He will appearing again at this year's Fn Fest Society in Ogunquit, Maine.  Tkts/info: www.thefanfestsociety.com  Stan has appeared with host Alexander Rodriguez in An Evening on the Lanai: Rembering the Golden Girls for 3 Sold Out shows at Oscar's in Palm Springs. They also performed it at the Bradshaw Performing Arts Center in Pinehurst, NC in Nov 2021. Stan was guest on multple live news show following the death of Betty White (CNN Newsroom with Ryan Nobles, CNN Newsroom with Frederica Whitfield, CTV News-Toronto, Good Morning, San Diego, NBC 7 San Diego). He's also appeared as a Talking Head on Ashleigh Banfield's news show.

Stan can be seen in the new talk show Brunch Date with Stan and Kristen. Their special guests were Mindy Sterling, Liz Torres, Amanda Bearse and Candis Cayne. All 5 episodes can be seen for free at www.Tellofilms.com

Stan was a Special Guest on two Golden Girls Fan Cruises in Feb/March 2020 and will returning on the next cruise April 8-13, 2023. Contact: www.goldenfansatsea.com  He also took part in the first ever Golden-Con in Chicago April 2022.  Stan will be mentoring writers at a castle in France in May 2023 as part of the Rocaberti Writers Retreat.  Look for his upcoming book, "The Girls: From Golden to Gilmore", to be published this winter by Indigo River.  In it, he will tell stories about all the wonderful women he's worked with.  And Roseanne. Please leave your email on this site if you want to be put on the pre-order book list.