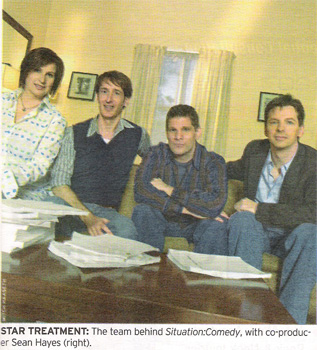 Everyone knows that getting a break in Hollywood depends, to some degree, on who you know. But the fact still remains that you still have to have some sort of talent once you walk through the door; the trick is, of course, finding the door in the first place.

Sean Hayes and his producing partner Todd Milliner took this idea and wound it tightly around the concept of finding the next generation of sitcom writers. The result is Situation:Comedy, a funny and insightful new reality show that explores the future of scripted comedy through a competition that reduces a field of 10,000 submitted scripts down to two. These final scripts are then green-lighted for pilot production and vie for a slot on NBC’s primetime line-up.

I met up with two of the stars of Situation:Comedy, out Hollywood stalwarts Maxine Lapiduss and Stan Zimmerman, at the Mullholland Drive home of PR legend Howard Bragman.

FRONTIERS: How did you both get involved with Situation: Comedy?

Stan Zimmerman: Well, I was working on Gilmore Girls and got a call from a talent agent. I thought he was pitching actors for Gilmore, but no, he wanted me! I’d always wanted to work with Maxine, having known her for years, so I called her up… and the Bravo people just loved her.

Maxine Lapiduss: It was great to get to work with Stan, but I kept thinking, ‘What if we have different tastes? What if we disagree on things?’ But it all ended up going smoothly between us.

How did you both get started in television?

ML: I slept with everyone [laughs]. How did you get started Stan?

SZ: As a child, I started a “4th network” in my bedroom and wrote my own TV shows. Then at NYU, my writing partner and I started writing spec scripts. We wrote a Cheers spec and it seemed to hit and agents started calling.

ML: And I was doing standup since age fourteen. … In college my sister and I and a friend of ours wrote an original pilot script and got it to Jose Rivera, who was working on a Norman Lear show, and he said to us, “You can’t write a pilot, you need to write a spec.” So our first spec script was for The Golden Girls. …We worked so hard on that script, and I guess it spoke to people, because it got us agents. But I kept performing and eventually got on Roseanne.

It seems like there was a lot of “educating” going on with the participants as to the inner workings of the television industry. Can you talk a little about your methods of dealing with the finalists?

SZ: At first I did some tough love with them… but then about a week or two into it I realized I didn’t have to be Simon Cowell. Ultimately, it was the contestants’ show, not mine. … I guess I just tried to teach them to pick their battles.

ML: Sometimes the finalists felt like we were plants from the reality show. Like we were trying to steer the action or something. We were just thrilled and delighted to be doing it. These guys [the finalists] were just thrown in… and we actually wanted to protect them.

What do you hope the success of Situation:Comedy will accomplish?

SZ: Well, we got to bring some amazing people onto the show from our years of doing TV. …It’s totally heartbreaking that all these talented people are out of work. So hopefully this reality show will produce a new hit sitcom that resonates with people and can employ people for years to come. That would be really exciting.

ML: We had 10,000 people send in scripts. And these are smart people, which told us that the American public still wants to be entertained with scripted comedies. … And this might be the way to get comedies back on. … Comedy has been broken right open, and I am selfishly hoping that one of these shows really hits.

Would you do it all again if there is a Situation: Comedy 2?

ML: It was so much fun. And with another season, the caliber will be so much higher. Wouldn’t it be great if this gave writers a whole new forum to get their work seen? I think so.