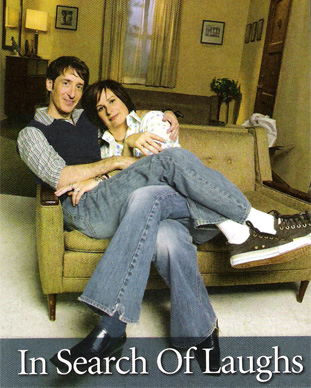 Stan Zimmerman and Maxine Lapiduss have been working on sitcoms since the 1980s. Stan got his start with the gay fave The Golden Girls, and Maxine's career took off after writing for the pro-gay Roseanne. In fact, both were writers on Roseanne. Now they find themselves in a world where the sitcom has lost a lot of ground to compelling cable shows and reality TV. So Sean Hayes and Todd Milliner decided to approach NBC with the idea for a show where two sitcom scripts would battle it out and America would choose which one they wanted to see. It is called Situation: Comedy, and Stan and Maxine came along for the ride...

INSTINCT: It is mentioned in the first episode that you received 10,000 pilot script entries for the show. How long did it take to get through all of those?

STAN ZIMMERMAN: We didn't have to. Sean and Bravo hired numerous readers, which is pretty standard in this town, and they had a numbering system which narrowed down the ones we could consider.

MAXINE LAPIDUSS: They got it down to 200, and that's where Todd and Sean started reading.

Well, it's kind of ironic that reality TV is what has been beating scripted comedy shows, and you're using that medium to launch a scripted show.

SZ: I have to admit that [Maxine and my] friendship blossomed over reality TV, discussing American Idol. And our love for Jennifer Hudson. [Laughs]

ML: It was a crime that she was voted off that season.

SZ: She's the one that got away! Had she slept with Paula, she'd be selling millions of records.

And the From Jennifer To Kelly movie would have been a hot lesbian romance story.

ML: With songs! That might have made that movie watchable, I guess. A lesbian musical!

The sitcom game has changed. Now you have shows like Arrested Development that don't rely on a studio audience and seem to take the traditional notion of a sitcom in a different direction.

ML: That's a great show. We both had an opportunity to work when you built a show around a talent or talents. Roseanne, you knew how to make her funny because she already had the routine. Tim Allen, the same thing. It's easy to take someone who's already fully formed like that who has been doing stand-up for 15 years and see how they're funny.

SZ: We were trained on those shows. They trained you to start from the very bottom. On the The Golden Girls I was a staff writer and thought, I can't write those jokes. But they invested in you and taught you how to write well. Now there are only four or five people on staff and you don't have people working up the ranks. Now it's like how it is on Situation: Comedy. You're thrown in to write a pilot and you either sink or swim.

I noticed that you two and Todd give a lot of comments throughout But Mr. Hayes doesn't really give a lot of side comments on the happenings. Was he intentionally keeping a lower profile?

ML: He's sprinkled throughout. In the first episode and the later episodes he has a large presence. After the initial setup, they knew we had run shows before, so they handed off the mechanics to us.

SZ: Sean also hasn't had the experience we had on shows. He made Billy's Hollywood Screen Kiss and suddenly he was thrown onto Will and Grace. His first time out he was in a great show with a great cast.

ML: It was like he won the lottery. So the style that they film Will and Grace, that's how he has learned to work. There's an episode where we get on the floor and Sean asks where the 20 writers are and where are the new jokes. We had a staff of seven writers and a book of jokes so that if one fell flat, we'd put in another one. It's a really compelling moment in the series because he was caught off guard and we were caught off guard. It seemed like the four of us might start fighting on camera. Don't fight on camera! Don't fight on camera! [Laughs]

Did you get any gay scripts in for the show?

SZ: We did. [Pauses and looks at Maxine] There was a gay-guy Golden Girls, I think. All older gay men but very Boys In The Band.

ML: But it comes down to: what would NBC buy? They already have Will and Grace. Do they want another gay show?

SZ:  There were scripts with gay characters, but even if it was a "gay" show, if it was good, I don't think it would have mattered.

Well, there are now less gay characters on network TV than there were, say, five years ago. Why do you think that is?

ML: In the past, the way to make someone quirky or interesting was to make them gay. I think the trend will now be to make the characters even more layered. Like having post-op trannies like they did on Nip/Tuck. Or Hispanic gays. Gays have had exposure, and now it is time for exposure for minorities within minorities.