When the screenwriters’ strike ended in early 2008, Nicole Sullivan told herself that she would choose her next job wisely. It had been a few years since her full-time gig on the CBS sitcom The King of Queens ended. She stayed busy in the intervening years, being a mom and making guest appearances on Scrubs and CSI, among other shows, as well as voice acting for some cartoons like Family Guy and Kim Possible.

Sullivan had been out of work for a few months due to the strike, however, and she needed to find some new employment. She wanted her next job to be something she really wanted, not just the first script she saw after the strike. 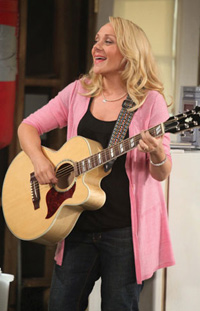 But the first role she was offered turned out to be just the one she wanted. Sullivan signed on in the title role in Rita Rocks, a Lifetime sitcom about a suburban mom, Rita Clemens, who dusts off her guitar and starts a garage band with a cast of characters from her neighborhood. She deals with the ups and downs of family life—working an unfulfilling job, taking care of the house, and dealing with her rebellious teenage daughter.

Though Sullivan has always been shy singing in front of people, producers Stan Zimmerman and Jim Berg talked her into auditioning for the role. “I just really jived with them and I liked what they were saying about the character,” she says. “I told them that I feel like I’m too shy to do this, and they were laughing in my face. They said, ‘We’ve seen you on [long-running Fox sketch comedy] MADtv, don’t tell us you’re too shy.’” She easily landed the job after a network test.

Though Sullivan hasn’t played music much since high school, the musical setting of the show is familiar to her. Her parents raised her as a musical child. They put her in violin lessons at age six and had a piano at home that she could "tinker with,” as she puts it. She joined the concert band in high school, where she picked up the clarinet and saxophone.

Acting became the priority by the time Sullivan was in her mid-twenties, so music moved onto the backburner. In 1995, she joined the cast of MADtv in its first season and stayed around until 2001. The show drew higher Nielsen ratings than Saturday Night Live for three years in a row in the late 1990s.

After leaving MADtv, she joined The King of Queens in the role of Holly. She has also worked heaps of voice acting gigs, most recently as Marlene on The Penguins of Madagascar and Drew Saturday on Secret Saturdays. “Those are some of the best gigs you can have, I’m so thankful for them. You can show up wearing whatever you want,” Sullivan says.

Now that she’s back on a musical set—though the instruments are muted and the music is piped in during takes—Sullivan is playing a little bit again, picking up a few guitar licks here and there, and singing her own parts. Some other cast members have experience too. Tisha Campbell-Martin, who plays Patty the mail carrier and the band’s keyboardist, is quite a singer. She even released an album as a vocalist in 1993. Raviv Ullman, who plays Kip the drummer, plays drums off-camera as well.

Rita Rocks is Lifetime’s first original comedy in over a decade—about as long as creators Stan Zimmerman and Jim Berg had been sitting on the pilot script. The duo have been in TV since the early 1980s, including writing and producing stints with Roseanne and Gilmore Girls. They worked on a number of shows where executives had their hands in the creative cookie jar, so to speak, and they decided they wanted to go back to something where they could express their own unfiltered creative voices.

"We thought, what better way to do that than this character [Rita] finding her voice through music,” Berg says. “We also liked that it was an average person just trying to keep the dream alive. We thought that was very relatable.” 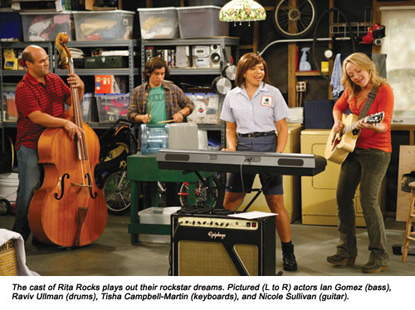 Berg and Zimmerman wrote the pilot on spec—that is, without any backing or guaranteed deals—and had to wait until their time came. “We’re assuming that it took music becoming part of the American zeitgeist—American Idol and iPods and all that—to get into people’s consciousness. It became the right script at the right time,” Zimmerman says.

The creators also like how they get to pick which songs the band covers on the show—tunes from all different genres, like “Love Shack,” “Passionate Kisses,” “Evil Ways,” and “Ain’t Nobody.”

As Rita Rocks began its second season in October, Sullivan has now played a musical TV mom for more than a year. She also has two real-life sons, Dashel and Beckett (born in August), which qualifies her as an “expert” for other moms that want to make time to learn or relearn an instrument. Her words of advice: “They deserve it.”

"The thing I’ve learned from this show is that when you’re a better person, you’re a better mom,” she says. “I think music makes us better people. It rounds us out in a way that’s really important.”