ON THE COVER
Situation:Comedy
Tuesdays at 8 pm on Bravo 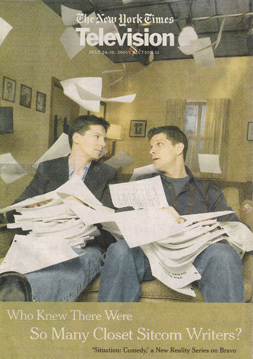 "Everybody has a screenplay," Todd Milliner was saying, "but we didn't know how many people had sitcoms."
The answer, it turns out, is at least 10,000.

Mr. Milliner was talking about "Situation: Comedy," a reality show he created with Sean Hayes (of "Will & Grace"). The show has its premiere this week, but actually started last year, with an open call for sitcom scripts. The idea was to narrow the submissions down to two, fashion them into 15-minute presentations and have viewers vote on which they would most like to see turned into a full-fledged sitcom.

Mr. Milliner said he and Mr. Hayes (shown above and on the cover) thought they might get 2,500 to 5,000 scripts; instead they got twice that, with an avalanche coming just as the deadline arrived last September.

"The post office called and said, 'You've got to come here; we can't get in,'" Mr. Milliner said. 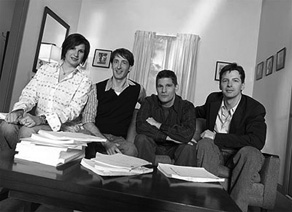 The outpouring was something of a surprise, a pleasant one. "It was exciting to see that there were that many people who were so interested in the field," said Stan Zimmerman, who has worked on shows like "Roseanne" and was one of several sitcom veterans who helped whittle the pile down. Maxine Lapiduss, whose behind-the-scenes credits include "Home Improvement," said she was struck by the time commitment all that closet writing represented; it's not like belting out a song on karaoke night. "To work or something for weeks like that is pretty impressive," she said.

Look through thousands of scripts by would-be writers and patterns emerge. "There were about 50 shows set in Alaska for some reason," Ms. Lapiduss said. Also, she saw lots of "funeral pilots" - scripts with the founding premise was that someone had died and left a relative an inn, a diner, whatever to run.

As for common mistakes, Mr. Milliner said many scripts had good jokes but "there really wasn't any story." Also - and this is odd since one goal of "Situation: Comedy" is to try to revitalize the form - a dismaying number of the submissions sounded very familiar.

"The biggest pattern I noticed is that a lot of shows were completely similar to what's already been on television," Mr. Milliner said, "right down to 'five friends who meet at a coffee shop.'"